Last week Mieke and I made our annual trek to Michigan State University in East Lansing, MI to attend the Michigan Beekeeper Association’s Spring Conference. Once again we had an enjoyable time at the conference, meeting and chatting with fellow beekeepers, and of course attending the various keynote addresses and breakout sessions. This year I thought the main keynote speaker (Dr. Jerry Bromenshenk) had exceptionally interesting addresses. He opened the conference with a talk on his recent work on Colony Collapse Disorder. Last Fall Bromenshenk and his colleagues published a paper (Iridovirus and Microsporidian Linked to Honey Bee Colony Decline) that garnered a significant amount of media attention as well as a fair amount of media misinformation, which we all have come to expect from the media. In any case, the study identified a pathogen pairing (invertebrate iridescent virus and Nosema ceranae) in colonies where CCD was present. In his address, Bromenshenk elaborated on his work in a fair amount of technical detail that I suspect very quickly lost the typical hobby beekeeper in the audience.  Perhaps what most present did grasp was Bromenshenk’s perspective that that CCD is not simply caused by bad keeping, e.g.,  you can do everything right, and still see your colonies get hit with CCD. 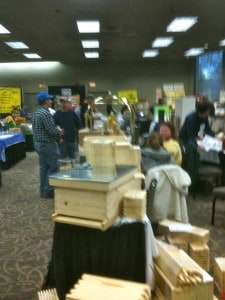 There were plenty of vendors in the exhibit hall selling woodenware and other beekeeping supplies.

Seeing that I was in a bee pathogen mood, next stop was Dr. Zachary Huang’s breakout session on bee diseases.  Huang started out with a discussion on mites, since they alone are capable of transmitting 18 different bee viruses.  Various manifestations of these virus were illustrated with some very excellent photography.   Also discussed was the affinity mites have for drone comb (a more than 3X boost in reproduction) and hence the rationale behind using drone combs to reduce mite populations.   Huang incidentally,  is the inventor of the Mite Zapper which is now being commercialized.  I had an enjoyable conversation with him about this technology in the exhibit hall later on during the conference.  The remainder of the talk focused on American and European foul brood, and Nosema apis (mostly gone here in the USA) and Nosema ceranae.  The latter was initially discovered in China in 1993 and is now the Nosema we find most commonly now here in the US.

After lunch we headed back to the auditorium to hear a representative from the Michigan Dept. of Agriculture bring us up to speed on Michigan’s new Cottage Foods Act as well as additional legislation passed last August that effects (positively) both honey and maple syrup producers.

I was hoping to attend the breakout session on the “Queen Breeder’s Initiative” next, but unfortunately there was no seats available, even though I arrive 10 minutes before the session started!  I guess if I had to voice a single complaint about the conference it would be the fact that some of the sessions were pretty crowded and had people sitting on the floor! At the same time, it is reassuring to see an increase in the number of folks out there who are interested in bees and beekeeping.

Instead of hearing about the queen breeding initiative instead we went for a more “out of the box” choice and ended up in Zachary Huang’s session on “Beekeeping in Turkey”.    Turns out this was actually a rather enjoyable session.  I enjoyed the photography that the speaker shared, and always find it interesting to hear about how beekeeping is practiced in far away places.  I’ll bet you never knew that there are 6 sub species of Apis mellifera in Turkey… 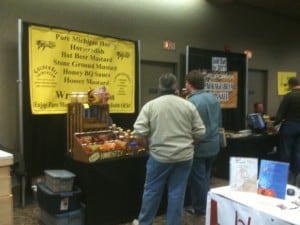 Selling honey to beekeepers has to be as successful as selling ice cream to eskimos.

The final session of the first day actually turned out to be the most useful to me.  Jerry Freeman, inventor of the Freeman Beetle Trap gave a really practical talk on “Backyard Queen Rearing”.   I’ve made some attempts to raise queens myself here in Michigan with rather dismal results.  My primarily difficulty has been getting good grafts, and getting my starter colony to build queen cells from my grafts.  Jerry advocate’s “punching” an entire cell with a 12-24 hour old larva.  Here the larva is left intact in its bed of royal jelly which eliminates what I perceive to be my biggest difficulty.   I’m looking foward to giving this a try this Spring and will followup with an update on how this turns out.

The opening keynote on the second day of the conference was definitely the highlight of the conference.  Once again, Dr. Jerry Bromenshenk gave the address.  This time he spoke on “Bees used for Technology”.    Bromenshenk and his colleagues and received a fair amount of funding from the military to investigate the use of honeybees for detecting landmines, among other things.  Early on in his talk, Bromenshenk showed a YouTube video his lab produced showing how honeybees were trained to navigate a maze.  Once he had our attention with the maze video, he went into some detail on how honeybees can be used to clear minefields.  He showed us another really fascinating video on this project.  This one unfortunately is not available on YouTube.   Bromenshenk indicated that it has been estimated that it will take over 500 years to eliminate all minefields with today’s technology, assuming that no new mines are laid.  Using the honeybee has been estimated to reduce that time to 50 years.   As if that was not enough high tech wizardry, Bromenshenk went on to show us how they are using acoustic and thermal signatures to automatically detect diseases and pests in honeybee colonies.   All in all this was an excellent talk!

After a leisurely lunch, I headed over to Jerry Freeman’s breakout session on Small Hive Beetle.  This pest just showed up in our colonies last summer for the first time.  Though they were not a big problem for us, I was looking forward to learning more about control methods.   After seeing Jerry’s photos of the horrific infestations he experiences in his apiaries in southeast Arkansas, I’ve decided Michigan winters are not so bad after all.  Wow, what a mess those beetles can make!  In any case, Jerry seems to have a trap that works a lot better than some fo the traps I’ve used to-date (AJ Beetle Eater, and similar contraptions).  I went ahead and ordered on the Freeman Traps from Walter T. Kelley to give it a try. 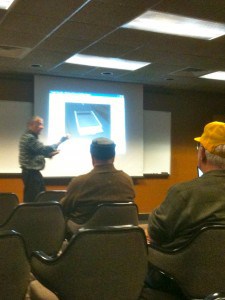 The final breakout session I attended was Dr. Roger Hoopingarner’s talk on “Thermology of Wintering”.   It was reassuring to hear Roger’s opinion that screen bottoms are just fine (more ventilation).  We moved all of our colonies onto open mesh flooring last year and our colonies have wintered very well.  We left the mite whiteboards in though so the bottoms were not left completely open.  Another interesting anecdote he shared was that 8 frame hives generally winter better than 10 frames.   Seems intuitive, but we use 10 frame equipment and I don’t see that changing anytime soon.

All in all it was an enjoyable couple of days, and a good opportunity to meet with other folks and soak up new beekeeping ideas.  The MBA board and conference organizers once again did a fine job putting together an interesting and worthwhile program.