What Is Raw Honey?

One of the most frequent questions we get asked by honey customers is: is your honey raw?  Interestingly enough, almost nobody asks us: what is raw honey?  Just for fun, for a while whenever somebody would ask if our honey was raw, I would answer by asking them what they thought raw honey is.  As I expected, the responses to my question varied significantly, and typically involved one or more of the following:

Some of these are partially, correct, some of them totally wrong.  Contributing to the apparent confusion and varying opinions on the topic, is the fact that there is no official binding legal definition of what constitutes raw honey in the USA.  If that is not confusing enough, there isn’t even a official binding legal definition at the federal level of what exactly honey is, though the FDA does provide a definition in a document of non-binding recommendations on on honey labeling.  The National Honey Board (an industry funded group under the oversight of the USDA that promotes honey) defines honey as follows:

Honey is the substance made when the nectar and sweet deposits from plants are gathered, modified and stored in the honeycomb by honey bees. The definition of honey stipulates a pure product that does not allow for the addition of any other substance. This includes, but is not limited to, water or other sweeteners. 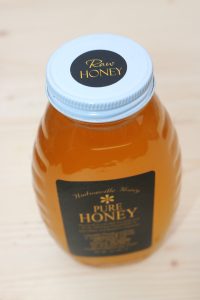 We bottle unheated and unfiltered honey into classic glass jars and label it as “raw honey”.

No surprises here!  Most consumers would probably agree that the above definition fits their conceptual understanding of what exactly honey is.  So what about the raw honey question then?  Which of the above answers is correct or most correct?  Well, the National Honey Board also provides us with a formal definition of raw honey.  Let’s start with that definition:

Definition #1: Raw honey is honey as it exists in the beehive or as obtained by extraction, settling or straining without adding heat.

So according to the National Honey Board, raw honey is simply honey that has not been heated or filtered.  The only allowable processing would be to let it settle in a tank (e.g. any debris in the honey floats to the top) and honey is gated out of the bottom, or to remove larger non-honey particles such as wax and bee parts by straining it (e.g. a mesh material – not a fine filter).

Many beekeepers take a more nuanced definition of raw honey that allows the warming of honey to decrystallize, provided the honey is not subjected to a temperature that would exceed temperatures the honey would be subjected to while in the hive.  In other words, we could take the National Honey Board’s definition and qualify the amount of heat that can be applied to the hive:

Definition #2: Raw honey is honey as it exists in the beehive or as obtained by extraction, settling or straining without adding heat that would exceed the temperature honey is subjected to while in the hive.

The obvious question this definition provokes of course is just how hot does it get in a beehive?  The answer to that question of course depends on which beekeeper you are talking to and where he/she lives!   Some beekeepers will put this at 95°F (35°C) which corresponds to the approximate temperature the bees strive to maintain in their brood nest (even in the middle of the winter!).  However, other beekeepers claim that a more realistic temperature is 118°F or even 120°F.   I suppose if you live in Texas or Arizona, that’s not much of a stretch at all.  Even on a muggy July day in Michigan, it sometimes feels at least that warm in the apiary!

Another relevant question to ask is why is honey heated at all?   Large scale honey packers (e.g. the ones that pack the  honey on the shelves of your local chain grocery store) heat honey to much higher temperatures (e.g. approximately 145° F for 30 minutes or more) for a variety of reasons.  They need to blend large amounts of honey from a variety of sources so that the honey has a consistent color and flavor.  The heat also makes it possible to pass it through a much finer filter which improves the clarity.  Finally, once heated to a higher temperature the honey will stay in liquid form much longer, and delay crystallization (yes – all pure honey will eventually crystallize).  These are all desirable side effects for the larger grocery chain that buys and sells honey in high volume, but not necessarily desirable for you the consumer. Go ahead and try some honey from your local small beekeeper and see how it compares to the “honey” you purchased from the large chain grocery store.

So what about the honey we sell?  From a labeling perspective we stick to the more conservative (and less ambiguous) definition of raw honey provided by the National Honey Board (see definition #1 above).  We bottle unheated, unfiltered honey directly into classic glass queenline 1 and 2lb jars.  These jars have wide mouths on them, as inevitably by the time it reaches you it will be partially or totally crystallized. The wide mouth facilitates scooping the honey out with a spoon, which is what you will need to do if you absolutely want to avoid applying any heat.

The honey we sell in plastic containers (squeeze bottles, etc)  is warmed temporarily, just long enough to melt the crystals, but not over approximately 105°F.  Most beekeepers and consumers still consider this “raw honey”.  So while it meets the second definition for raw honey above,  we do not label it as raw honey.  We prefer to make a distinction between honey we subject to no heat at all, and honey that we warm enough to make sure its liquid (its kind of hard to get crystallized honey out of a squeeze bear!!).  With this approach, you the consumer get to decide which definition for raw honey you prefer, so you can purchase the product that best fits your personal preferences. 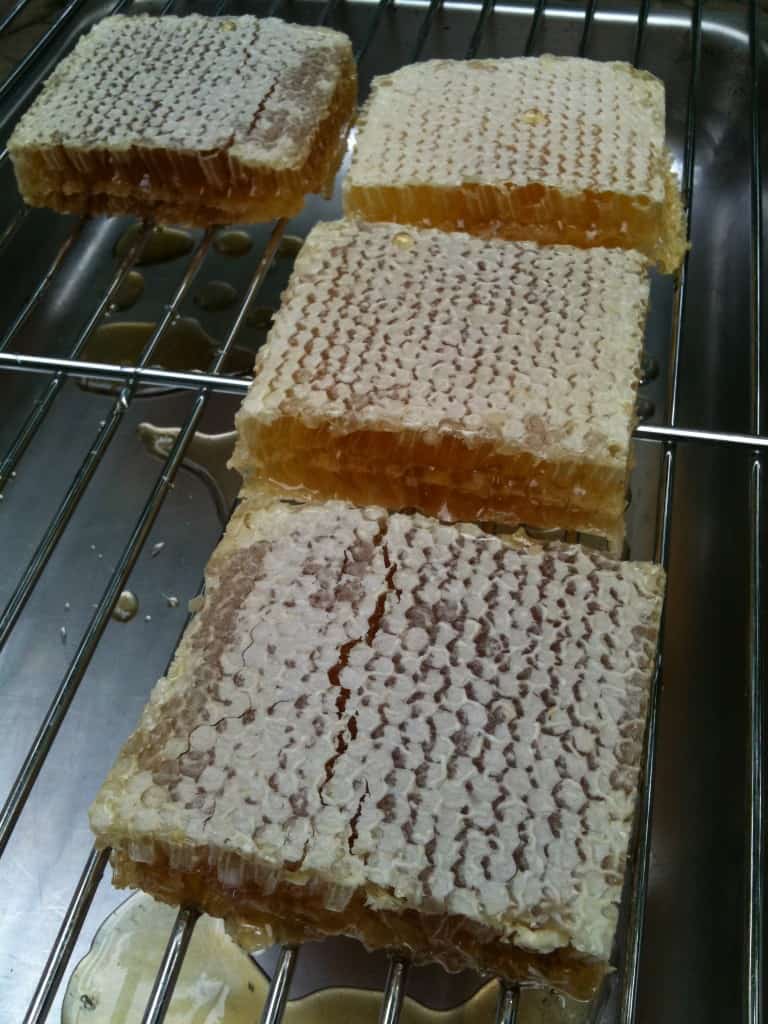 Extreme “raw honey” – honey sold in the comb! The cut edges are allowed to “drain” over night, before packaging.

It’s also worth pointing out that we also sell limited amounts of comb honey in season.  Comb honey is just that – honey that is still in the comb where the bees placed it!  We basically cut square sections out of frames of honey from the hive into 8-12oz chunks and place in a leak proof container.  The bees wax is completely edible, so you can spoon the comb honey into your tea, oatmeal, yogurt or simply eat it by the spoonful (as our kids like to do).  This kind of raw honey trumps all other definitions of raw honey!  If you haven’t ever tried comb honey, you should.  The problem is that its more difficult to produce, and many beekeepers don’t bother trying.  Nevertheless, if you keep an eye open at your local farmer’s market during the summer months, you just might find a vendor selling it.  We usually have some available during August  – October, but normally sell out fairly quickly.