The Big One That Got Away…

Last weekend it was very hot and muggy here in Michigan.   The thermometer in the truck indicated 93 degrees when my son and I returned after lunch to our garden.   We’ve co-located our family vegetable garden with one of our bee yards.  This was our second attempt to plant our garden this Spring.  Previously, we had dedicated an entire day in May to rototilling/planting it.  Shortly thereafter, we received a heavy rain and cooler weather and our labor was for naught.

In any case, as we approached the garden, I noticed a nice swarm of bees hanging around 15 feet off the ground on a tree bordering the garden.  I wasn’t surprised to see them, and in fact had deliberately scanned the trees looking for swarms. Two days earlier while inspecting the colonies at that location I noticed one (the only one I had not split 3 weeks earlier because I didn’t think it had enough bees!) was very strong and had a number of swarm cells started.  At that point it is really too late to do anything about it! 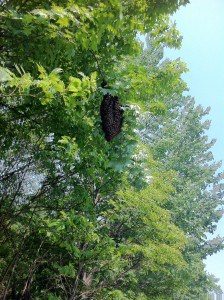 We discover a sizable swarm hanging 15 feet off the ground on a nearby tree.

Happily, in this situation, while the swarm was a good 15 feet off the ground, the limb they were hanging on protruded from the tree trunk only around 8 feet off the ground.   My son easily climbed up with a pruning saw in hand and proceeded to cut the limb off.  I stood below and caught the branch as he gently sawed the last few strokes before severing it altogether.  So far so good! 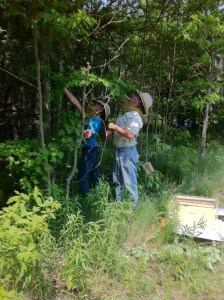 Sizing up the situation. We decide to saw off the limb they are hanging on.

We had any empty hive body standing ready, and promptly shook the swarm into what we thought was to be their new home.  But alas, bees will be bees and it was not to be.  Several minutes later after we congratulated ourselves on hiving yet another beautiful Spring swarm the bees absconded in a frantic roar!   Within minutes, the swarm was once again airborne, and the sky around us black with bees. After around 5 minutes of frantic chaotic flying, the swarm bivouacked on a branch in the same tree. However this time a good 40 feet up and well out of our reach! 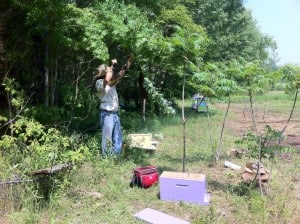 I wait below as my son gently saws off the limb.

It was disappointing to lose a nice swarm like that, but at the same time watching them take flight was a fairly awesome spectacle, which we captured on video (see below).  I’ve witnessed colonies cast a swarm before in the bee yard.  While its an event we beekeepers try hard to prevent, it’s also a very inspiring experience.   Several weeks ago, I had finished reading Tom Seely’s new book Honeybee Democracy

.  Seely’s book is a wonderful and fascinating study of the democratic process bees implement in the process of swarming.   With all of that material fresh in my mind, disappointment aside, it was good to spend a hot muggy day outside witnessing bees doing their thing. 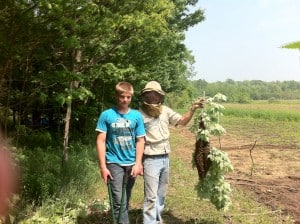 Successful, at least so far... 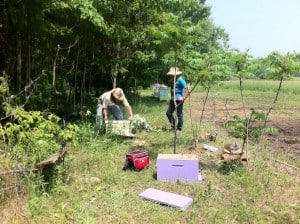 The swarm is safely installed in their new home. 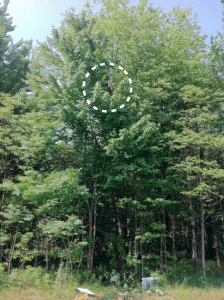 The swarm lands on the same tree - well out of reach.