More beekeepers are beginning to advocate late Summer and early Fall requeening of colonies.  The rationale for this is based on a variety of reasons.  The more convincing arguments are 1) a young queen during late Summer / early Fall will lay more prolifically, producing more bees at this critical stage of the year to maximize the odds of surviving winter.  2) a late Summer / early Fall queen will be more effective in the Spring when early buildup is key, and at the same time will be less likely to swarm than an older queen.

Some weeks ago we had posted our experiences at queen raising. We were able to successfully raise a number of young queens from our stock that survived last Winter.  We also carefully monitored mite loads and selected larva from the colonies who carried the lowest numbers of mites, as presumably these strains are doing something to discourage the mite populations from growing quickly.  Given the success of our queen rearing attempts this year,  by late summer we have a number of nucs filled with bees and young queens raised from our survivor stock.  In late August / early September long after all of our honey supers have been removed we decided to requeen a number of our colonies that had 1-2 year old queens with the young queens we had raised. 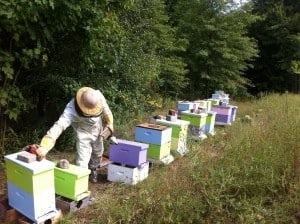 Getting a ready for a very long afternoon of "queen hide and seek"!

In the past we’ve normally purchased queens for requeening and we also typically did it in the Spring.  This year we decided to do things a bit differently.  Here is the process we came up with based on past experience and intuition.

Step 1: Locate the old queen in a colony selected for requeening.  This turned out to be a fairly time consuming process, as this time of the year our colonies are boiling over with bees.  Once the queen was caught we’d cage her along with 4-5 workers and place her aside.   If we manage to keep these queens alive in their cages long enough we can use them as our “last chance” option on colonies that reject the new young queens.

Late summer the colonies are at their peak population level. Once we shake them all into one brood chamber they will be bearding all over the front and sides of the hive.

Step 3: Replace 3-4 frames in the second brood chamber with 3-4 frames of brood / bees and the new queen from a nuc.   The frames we were taking out of the established colony are typically going to be honey and pollen as by this time of the year, the second brood chamber is heavy with honey.  We will use these frames of honey on colonies that need a boost in order to have a chance at surviving winter, or if not needed, we will store until Spring and give them to the bees as feed.

A beautiful young Russian queen raised from our survivor stock who will soon have a bunch of new hive mates...

Step 4: Put a layer of double news paper between the first brood chamber and place the second brood chamber on top.  We often to do this in the Spring to join a week colony to a stronger colony and it seemed to be an intuitive way to introduce the new queens from the nucs as well.

The double newspapers will separate the brood chambers long enough for the colony to accept the new queen place above the bottom brood chamber.

Step 5:  Provide the colony a 2:1 mixture of sugar syrup.  The goldenrod and other Fall sources of nectar were just starting to bloom at the time, and we wanted to make sure the bees had something.  I’ve read that the odds of them accepting the queen are much lower if there is not a good nectar flow or feeders on the colonies.

Step 6: Examine the hive 5-7 days later to check if the new queen is accepted and laying.  We also inspected these colonies weekly ever since, as some of them that initially accepted several weeks layer started supercedure. 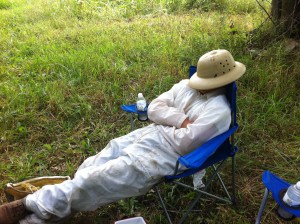 This is what you feel like after spending a long afternoon finding queens in large colonies.

We ended up with around an 80% success rate in terms of acceptance.  While at first this seemed disappointing, when we thought about it some more we realize anytime you are 80% successful in anything beekeeping, you’re batting a pretty good average.   We are currently working with two different strains of bees: Italians and Russian hybrid.  We raised queens from both strains and made sure that we also introduced the young queens into colonies of the same strain.  All of our problem colonies turned out to be Russian hybrids.  They seemed much more inclined to either reject the queens outright or supersede them after initially accepting them.  I’m not exactly sure why this is, but our experience in the past as always been that its harder to get the Russian colonies to accept new queens.

I would say the number one challenge in this approach is finding the old queens.  It’s a very time consuming task and definitely would not scale up if you needed to do a large number of colonies.  I’m really not sure how else to do this.  We did double up our ripe queen cells in our mating nucs as we had more of them than we had nucs, but perhaps I should of put a ripe cell up in the honey supers in late July.   Even then, I’d still probably end up going through the colony later after the honey was removed to see if I had my original marked queen or a new queen.

If you have a successful and less labor/time consuming approach to late Summer / early Fall requeening, I’d really like to hear from you.