Winter was long in coming here in W. Michigan. We still had some very temperate sunny afternoons in November. On one of those afternoons I visited one of our apiaries to see how the bees were faring. There were a few bees flying, gathering water from a nearby low spot on the edge of the field. As I watched them arriving and leaving at the hive entrances, I noticed this drone bee lying on his back in one of the entrances, and obviously at the end of his rope!

There are three different types of bees in a honeybee colony. There is typically one queen bee (there can be more than one of these at times…). A queen is a female bee with functional reproductive organs. There are many worker bees. Worker bees are also female, but they are not responsible for reproduction within the hive. Instead, they do the work, such as feeding the brood (baby bees on the way), cleaning house, and gathering nectar. And yes, the workers are also the ones that will sting you if you disturb the hive! The drone bee is a male bee. Contrary to popular opinion, the drone is not simply a freeloading loafer who eats up all the hard earned spoils of the workers! While it is true they don’t do a whole lot to help out around home, they do still play an important and highly specialized role in the honeybee colony. 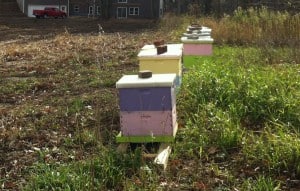 Apiary on a nice November afternoon.

On warm spring and summer days, the drones fly out to what are known as drone congregation areas (DCAs). Little is known about DCAs in terms of how they are chosen, how drones find them, etc. Young virgin queens will also fly out to these areas. Multiple drones will mate with a single queen while in flight. The drones that succeed in mating with a queen will actually meet their end then and there! The drone’s male appendage and associated abdominal tissues are ripped out after intercourse, and he will die shortly thereafter.

Those drones who do not meet their ends in the mating maneuvers will eventually wear out their welcome at home. As the colder days of autumn arrive, the colony will stop raising new drones, and the existing drones will be driven from the hive by the workers to die out in the cold. Such was the situation of the drone I encountered on the landing board on that warm November afternoon. Cruel as this seems, it makes perfect sense in the highly efficient honeybee colony. There will be no mating flights during the winter months, hence there is no need to keep the drones around.

In the spring time, the colony will once again start raising drones. For those of us who attempt to raise our own queens up in here in the northern states, we typically hold off until we see flying drones in our apiaries and temperatures that are warm enough to allow the mating flights to commence.

No drones, no honeybee colony and no apple pie!

Hence, the drone honeybee, though a bit of a bum at home, still plays a very important role in the life of a honeybee colony. Without drones to carry on the genetics and actively mate with virgin queens, the honeybee colony would be doomed. If the honeybee colony ceased to exist there would be no honey for your bran flakes, no almonds for your salad at lunch, and no apple pie for desert after dinner!