Beekeepers, like bees, tend to have a language of their own. To the non-beekeeper, or newbee, the technical jargon beekeepers use can become rather confusing. The other day when speaking to a non-beekeeper, I casually mentioned we were out the day before “supering” our colonies. I got this sort of confused look and the inevitable question, “how do you super bees?” Let me explain. Supering bees refers to adding another box of frames on top of the colony. Each frame contains a drawn out comb, or possibly a fresh sheet of wax foundation upon which the bees will draw out a comb. We like to run 9 frames in standard 10 frame equipement, as it makes the “uncapping” process when extracting honey a lot easier. The term “super” comes from the fact that each box is superimposed upon the box underneath it. Hence, we beekeepers refer to the box as a “super”, and use the verb “supering” to describe the act of adding the super to a hive. If you’ve been beekeeping for a while, you probably refer to the boxes above the brood chamber(s) as supers (e.g. the boxes where you expect eh bees to store surplus honey), and the lower boxes containing the brood as “hive bodies”. However, nowadays, with a lot of hobby beekeepers using the medium sized boxes for brood as well as surplus honey, the term “super” is often used to describe any box of frames, independent of whether it contains brood or honey! 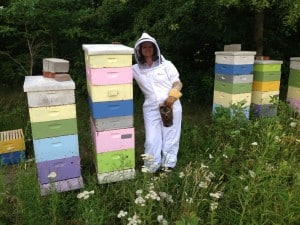 My super awesome beekeeping assistant posing with some of our super crazy bees!

In any case, in our locality, the well-timed rains interspersed between ample sunshine has really kept things growing super well. This translates to a superabundance of nectar bearing plants for the bees to forage which in turn means we have some “super” crazy bees – we can’t seem to super fast enough!  We typically start out by adding a couple of medium supers in late May, early June, and then depending on conditions will add another super or possibly two when the star thistle starts to bloom mid-summer. This year, by the end of June, we already have a number of colonies in our apiaries that have already filled 3-4 mediums with surplus honey, and some as many as five! The past few weeks we’ve been stapling together  additional supers/frames and getting them on the bees as fast as we can get them put together. We’re quickly reaching the end of our super inventory, super quick though, so plan B will be to extract some of the honey early and put the empties back on the colonies. It’s been a super crazy summer keeping up with the super crazy bees, but its a super awesome problem to have if you are a super crazy beekeeper. 😉 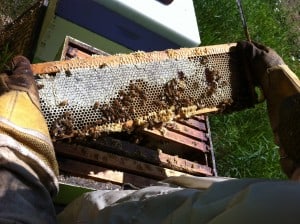 A partially capped frame of honey – the Creator’s golden gift to anybody willing to sweat a little (and withstand a few bee stings.)