Our previous article provided some guidance on the essential equipment you will need to keep bees. Now it’s time to talk about the bees themselves. As a new beekeeper you have a number of options available to you when it comes to getting honeybees for your new hive. Perhaps the most common option for new beekeepers is to purchase package bees. Package bees are raised by commercial beekeepers in the southern states here in the USA. During the springtime, three to four pounds of bees are shook into a screened package about the size of a lunch box. A young mated queen with attendants is placed in with the bees in her own small cage, and a tin of syrup to sustain the bees on their journey. Beekeepers will order these packages during the winter months and  install them in their empty hives in the Spring. 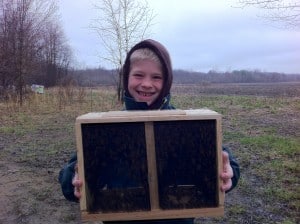 A three pound package of bees is a popular way to get a colony of bees started.

Another option that is becoming increasing popular is to purchase a small nucleus colony, commonly referred to as a nuc. A nuc is an established colony that consists of 4-5 frames of bees and a laying queen. Nucs are typically started by commercial beekeepers in the spring by splitting a full-size hive. Sideline beekeepers (including yours truly) also produce nucs from their splits and sell them to other beekeepers in their locality. Some of us also have learned how to overwinter nucs in northern climates, and make them available in the spring to customers along with spring splits from our full-size colonies.

So which approach is better, packages or nucs? The answer is that it depends. A nuc is advantageous in that it is an already established hive with a laying queen and fully drawn combs. If you are shaking a new package into new equipment, the bees will have to draw out the combs. Furthermore, you it will take a few days to introduce the queen to the bees, and probably a few more days before she begins laying consistently. If you transferred a five frame nuc to a hive and installed a 3 pound package at exactly the same time in the same locality, the nuc would be around 4 weeks ahead of the package in terms of development. You’re probably thinking by now that a nuc is obviously the best way to go. However, it really depends. A lot of beekeepers who sell nucs see it as an opportunity to get rid of their old dark junk combs. Along with the bees, you might be buying somebody else’s problems as well. You have no idea what kind of chemical cocktails the beekeeper throws at his bees to knock down mites, and if the combs are really old they could be loaded nosema spores, foul brood, etc. We’ve also seen nucs here in Michigan being sold by migratory beekeepers who overwinter in the south that have really high beetle loads. If you buy packages from a reputable provider, they tend to knock the mites and beetles back before they shake bees so you typically don’t have as much a problem with mites/beetles, at least at the outset. Since the packages obviously don’t come with combs, you’re also eliminating some potentially contaminated material from your new hive.  If you’re shaking your package onto foundation, sure they will take longer to get established, but they might be healthier as well, since they don’t have to deal with junky contaminated combs that the nuc seller just unloaded on you.

Another thing to be aware of when buying a nuc is the frame size.  If you plan to maintain your broodnests in medium sized frames and your nuc comes with deep frames (or vice versa) you’re going to be in for a surprise when you go to install them.  If you know who your nuc provider is before you purchase your equipment, you can plan accordingly and not have a surprise in the spring when your bees finally arrive. 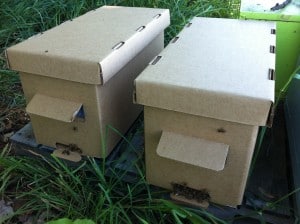 Nucs are a small all ready established colony of bees, typically consisting of five frames with bees, and a laying queen.

If you choose to go the nuc route, I’d encourage you to find a local beekeeper in your region of the county that sells nucs from wintered over colonies. If you buy packages or nucs that were raised on the other side of the country you have no idea if that stock will fare well in your particular area, particularly during those long winter months. If you buy “local” bees from somebody nearby, you know that this beekeeper has been successfully wintering his stock in your neck of the woods, and that is a reasonable indicator that you’re buying bees that have decent odds of surviving where you live. You should also ask the nuc supplier how old the frames are. If the frames are older, those nucs should be priced lower than a nuc supplier who is selling nucs with newer frames (e.g. less than 3-4 years old). If the frames are older you should rotate them out (e.g. replace them with new frames/foundation) as soon as the colony is established.

Another question you might be wondering about is what kind of bees should you get. You may have read about the different strains being sold these days (Italian, Russians, Carniolans, Caucasian, VSH, etc.)  We started out years ago with Caucasian’s. They were good honey producers and very gentle to work with.  However, they were really sticky bees! They seemed to gum up the hive with a lot of propolis. Much more than other types of bees. After that we bought Italians which were good all around bees. When we decided to abandon treating our bees with synthetic miticides, we started buying Russian hybrids, as they are said to more effectively deal with mites. We found the Russian bees wintered very well in Michigan, but built up much slower in the Spring. We also found them to be a lot hotter (e.g. meaner) than the Italians. Overtime, we bought more Italian packages, and didn’t see a lot of difference in mite loads in those bees vs. the Russian hybrids we were running. We haven’t bought bees for a number of years now as we are able to maintain our apiaries from our own splits, so our bees these days are essentially mutts. A few of our colonies have darker bees (e.g. Russian traits) but most of them seem to resemble the Italian bees in terms of appearance and behavior. We raise are our own queens, and there are a number of commercial beekeepers in our vicinity (who keep Italians as far as we know) so I’m guessing after a number of generations most of those Russian genes are fairly diluted as our virgin queens mate with mostly Italian drones.

A package ships with a tin of syrup for the bees to consume on the way.

I really don’t have a strong opinion or recommendation on what kind of honey bee is best for a beginner. I would recommend you locate a local nuc provider and try whatever strain of bees they happen to have. If you decide to go with packages, I would suggest buying Italians from a reputable supplier down south. Italians are a gentle bee to work with (good for a beginner) and also good honey producers. Whether you go with nucs or packages, one thing you definitely need to do is order your bees way in advance. The earlier the better. If you wait to order until March or April you likely won’t get bees!  Most bee suppliers have no difficulty selling out every season. There is more demand for packages and nucs than there is supply.

If you miss out completely (e.g., you read this article in mid April and sudden have an itch to start beekeeping), you just might be able to get yourself some free bees. Free bees? Sure, call your local fire department in the spring and tell them you will remove swarms of honeybees that are clustered out in the open (e.g. on a shrub) and within reach. You might also go to your bee clubs website and see if they offer a list of beekeepers willing to hive swarms to the general public. We get quite a few calls in the spring from people who have a swarm of bees descend on the magnolia tree in their front yard. Last year we even hived a swarm in front of an Applebee’s restaurant! However, if you’ve never worked with bees before, trying to hive a swarm as your first experience might not be the best idea. You can get yourself into some rather crazy situations trying to hive swarms and its probably best if you have some prior experience working with them. However, it is an inexpensive way for the hobby beekeeper to increase the number of hives in his/her apiary during the Spring.

If you forget to order bees you can always go out and try to catch a swarm!